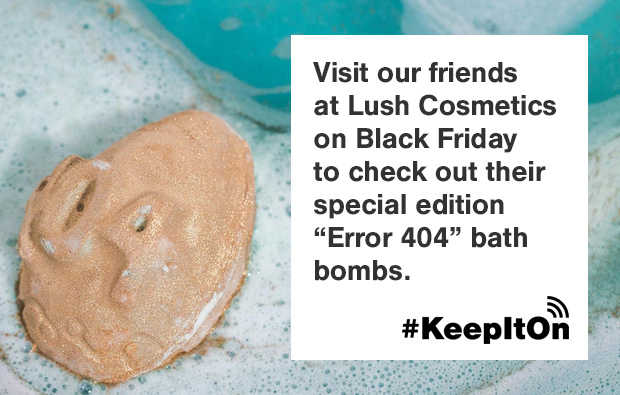 So far in 2016, we’ve seen over 50 internet shutdowns around the world. That’s more than double the number we recorded last year. This trend has impacted millions of people, cost the global economy billions of dollars, and is a deeply serious violation of human rights that cannot be ignored.

It’s time for this to stop. That’s why we’re proud to work with our partners at Access Now on the Keep It On campaign, fighting against internet shutdowns around the world.

And today, we’re excited to launch a new collaboration with the excellent folk at Lush Cosmetics – the Error 404 Bath Bomb – the latest defence in internet freedom!

Starting today, the sale of these super fun bath products will help support the #KeepItOn campaign and local partners fighting internet shutdowns around the world. (Bonus: It has a secret message inside!)

The promotion will be featured on Lush.com and in hundreds of stores across 40 countries. It’s aimed at raising awareness about internet shutdowns and encouraging more people to sign the #KeepItOn petition.

Spread the word! Share this video with your online communities to help build the movement fighting to #KeepItOn.

Stopping internet shutdowns is a massive fight. But thanks to committed people like you, it’s a fight we can win.