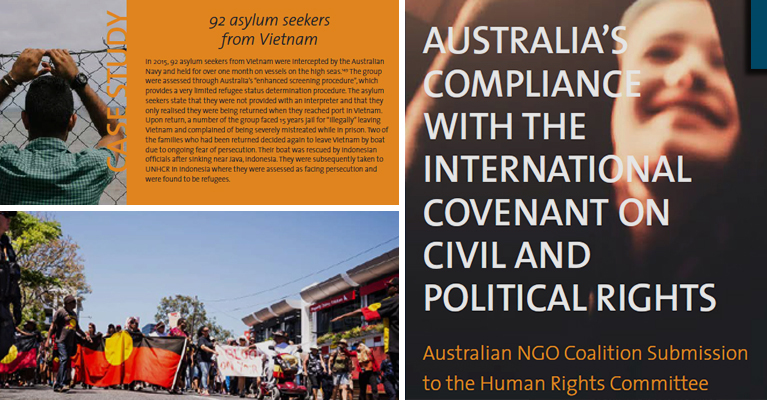 During the same week that Australia is expected to be granted a seat on the United Nations Human Rights Council, an expert UN Committee will grill the Australian Government over its own human rights record.

A coalition of Australian NGOs is in Geneva to brief the UN Human Rights Committee – the panel of independent human rights experts tasked with assessing Australia’s adherence to the International Covenant on Civil and Political Rights (ICCPR). The delegation will present a report endorsed by 56 Australian NGOs.

During Australia’s last review, in 2009, Committee members raised concerns about the Australian Government’s policies on Aboriginal and Torres Strait Islander peoples’ rights, its cruel treatment of people seeking asylum, its use of national security laws to erode basic civil liberties, and police information sharing practices on cases that involved the death penalty overseas.

The NGO report sets out how Australia has not made sufficient progress towards implementing many of its obligations and has instead gone backwards in a number of areas.

Australia was once considered a world leader when it came to promoting some of the key rights that underpin successful democracy – access to voting, the right to peacefully protest and for workers to stand together in union. Australian governments are now eroding these foundations of our democracy. Civil society groups are being silenced, peaceful protest is being criminalised and workers are being stripped of the right to take industrial action. These backwards steps are being noticed at the UN.