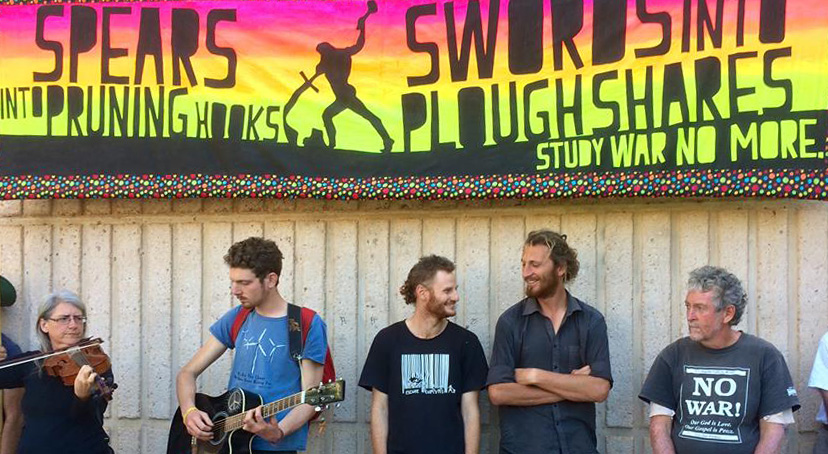 We seek your urgent intervention to protect the right to freedom of speech, expression, political communication and of religion for six Australian citizens who face up to seven years in jail for a peaceful protest in which they were praying and playing musical instruments.

In September 2016, several hundred Australians of diverse ages, professions and creeds gathered in Alice Springs to mark the 50th anniversary of the signing of the Pine Gap Agreement.

As part of the peaceful protests near the facility, five Christians prayed and played a musical lament, regarding the role of Pine Gap in war-fighting in Afghanistan, Pakistan, Yemen, and Syria. They were arrested.

The peaceful and symbolic ceremonies conducted by Margaret Pestorius, Tim Webb, Franz Dowling, Andrew Paine, Jim Dowling, as well as Paul Christie (arrested in a separate incident), were intended to bear witness to the death and suffering of civilians as a result of United States military operations, including drone assassinations, facilitated by surveillance conducted at Pine Gap.

Since their peaceful protests, more evidence has emerged detailing the role of Pine Gap in the activities that concerned the Peace Pilgrims. It implicates Australia in extrajudicial drone assassinations in countries with which we are not at war, in nuclear weapons targeting and in illegal mass surveillance.

Three months after the protest, you authorised the prosecution of these concerned citizens for ‘unlawful entry’ under the Defence Special Undertakings Act 1952 (Cth).

That legislation was drafted at the height of the Cold War to secure areas for British nuclear testing, and it permits prosecutions to be held in secret, and for records of hearings to be destroyed, imposing penalties of up to $42,000 and 7 years in jail.

This prosecution occurs as Australia prepares to serve on the UN Human Rights Council and when UN Rapporteurs have criticised policies, laws and actions of your government that undermine freedom of expression, freedom of assembly and the right to protest. These are fundamental civil rights, and they are profoundly important when governments are engaged in the sort of conduct which Pine Gap facilitates.

Five of the defendants are devout Christians. Their faith impelled them to give voice to the teachings of peace and love for humanity and creation found in the Bible.

In this case, where Australian citizens were doing no more than praying and peacefully expressing dissent, prosecuting them is not only grossly inappropriate but a shocking waste of court resources.

We, the undersigned, urge you to exercise your discretion to direct this punitive, disproportionate and expensive prosecution be discontinued before the matter comes to court in Alice Springs on 13 November 2017.

See the full list of signatures at Close Pine Gap