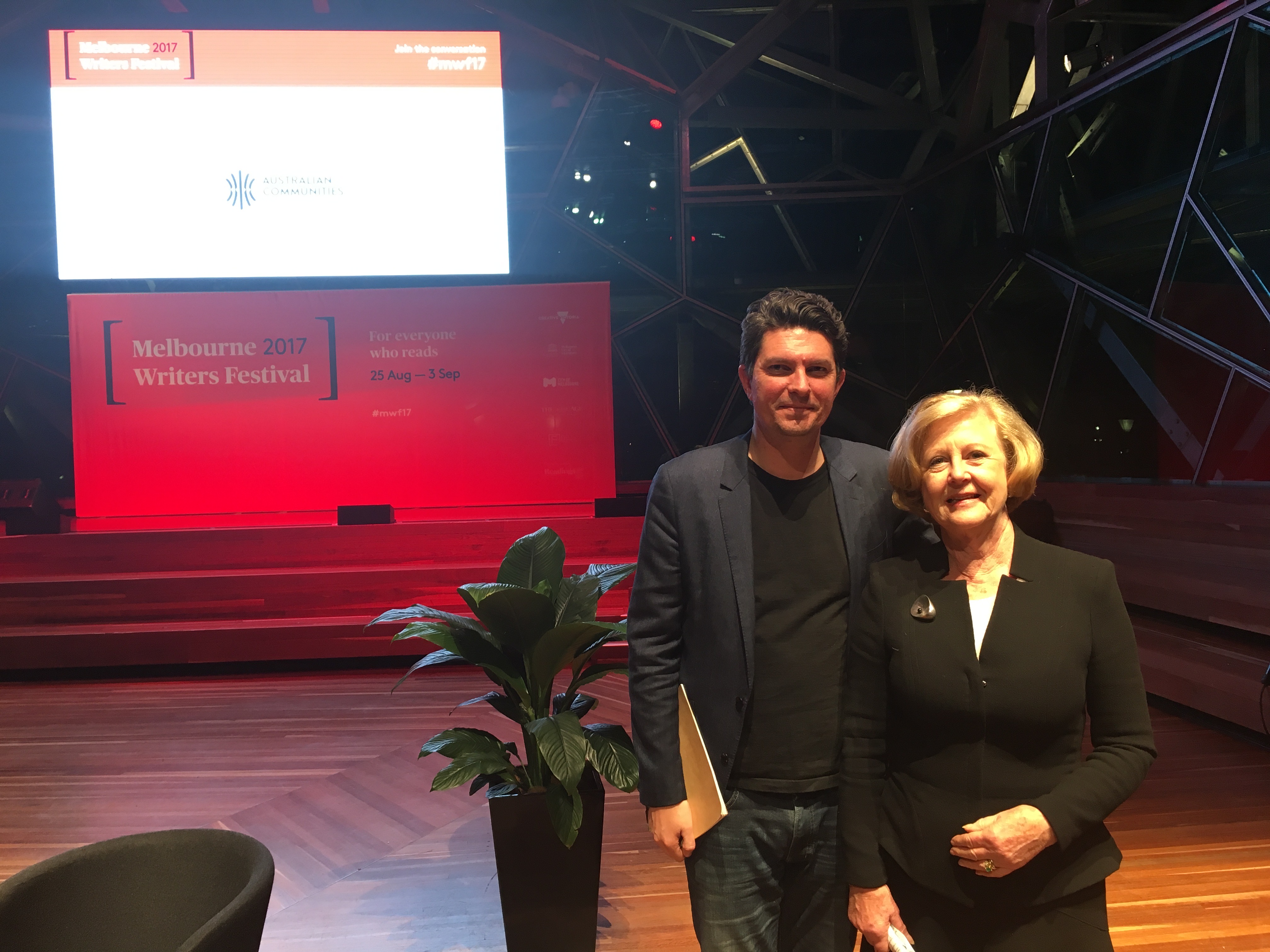 Well now, that was a long year. Here’s a quick reminder of all the happenings in the digital rights space that the team at Digital Rights Watch has been working on over the past year.

We started the year by welcoming the release of a UN report calling for a global treaty to protect internet user’s right to privacy.

The United Nations Special Rapporteur on the right to privacy, Joseph Cannataci, presented his report to the Human Rights Council, denouncing current surveillance legislation and calling for States to respect privacy as a universal right in the digital age.

Get a VPN Day

To mark the start of a new national scheme that compels all Australian telecommunication providers to collect your metadata and provide it to your Government, we declared April 13 to be ‘Get a VPN Day’.

Many interactions we have in the digital world are being collected and stored by our communications providers, all without adequate safeguards. This program requires no warrants, has very little oversight and has received condemnation from human rights experts worldwide.

That’s why we called upon Australian citizens to educate themselves about the scale of this surveillance and take precautions accordingly. If the government wants to surveil its citizens, then we’ll do everything in our power to equip people to circumvent that surveillance.

Read more about Get a VPN Day on ABC World Today, VICE, The Guardian, The Age,and Junkee.

Intelligence sharing operations – who is watching the watchers?

Countries often use secret intelligence sharing arrangements to circumvent international and domestic rules against direct surveillance. National intelligence oversight bodies hold intelligence agencies accountable to the public by exercising scrutiny over the legality, propriety, effectiveness, and efficiency of the intelligence activities of their governments.

We partnered with over 30 international organisations in pushing national intelligence oversight bodies in over 40 countries, including Australia, to reveal information on the intelligence sharing activities. We wrote to these oversight bodies, calling for more transparency in the way that they operate.

This year, the Council of Europe explored additional protocols to the Cybercrime Convention, focussed on the collection electronic evidence, such as contents of social media, emails, messaging services or data held in the cloud – access to which is often required in criminal investigations.

Since in the digital environment the geographical borders are often blurred, investigations require cross-border cooperation between multiple public authorities and between public authorities and the private sector. We worked with European Digital Rights and others to ensure that the Council were protecting human rights when developing these new rules.

The metadata footprint of Gillian Triggs

Professor Gillian Triggs gave us access to a log of mobile phone calls, emails and social media and other online interactions she made in one day, which provided enough information to reveal her home city, age details, and confidential details of upcoming speeches, board meetings and conversations.

You can read more about the event and what was revealed from Professor Triggs’ metadata profile in Buzzfeed and Crikey, or listen to us on 2SER.

Taking a stand for marriage equality

In the midst of the marriage equality postal survey, we at Digital Rights Watch wanted to make clear our own organisational stance. We recognise the right of our lesbian, gay, bisexual, transgender and intersex friends to live and work free of prejudice and discrimination, including the right to marry the person of their choice.

We particularly acknowledge the role that strong digital rights can play in supporting and empowering the LGBTQI community. Instituting marriage equality within Australia is a strong message of acceptance, tolerance and support for the love of two people. It is a matter of equality, and particularly as we fight to ensure that access, use and identity on the internet is equal, we must ensure that is true for those in the LGBTQI community as well.

The fight to save encryption

The government proposed new laws to combat message encryption used by technology companies from overseas in the case of law enforcement needing access to certain users messages in police investigations.

We’ve also seen worrying signs from the government that they wish to compel social media companies to hand over access to user’s encrypted content. The protection that is offered through encryption is important for everyone, and we’ll continue the fight to protect it.

We wrote to the Attorney-General, asking for clarification on this issue, and we have also joined with other organisations globally in calling for governments to protect encryption, before and following a key meeting of Five Eyes governments. You can also hear us give a rundown of this issue on radio.

We responded to social media guidelines for federal public servants released by the government, which are a gross overreach of power into the private lives of government employees.

The new guidelines warn that public servants would be in breach of code of conduct if they “liked” anti-government posts, privately emailing negative mat­erial or do not ­remove “nasty comments” about the government posted by others. The new policies apply to employees even if they use social media in a private capacity outside of work hours. It’s a worrying development that we’ll continue to monitor and advocate on.

We joined forces with 32 other non-profits and civil society groups to produce a report to the United Nations Human Rights Committee, examining Australia’s compliance with the International Covenant on Civil and Political Rights.

As the Human Rights Law Centre’s Emily Howie told Guardian Australia: “A close look at Australia’s human rights record shows that Australia is going backwards almost across the board.”

Digital Rights Watch brought specific focus on Australia’s mandatory metadata retention scheme and how it impacted on the human rights of Australian citizens.

In October we partnered with QUT, Australian Privacy Foundation, FutureWise and ThoughtWorks to run the ‘Attacks on encryption‘ event. This was in response to the Australian Government’s intention to pursue new and increased powers to access encrypted communications via backdoors.

We’ve been increasingly concerned by the decision by the Council of Australian Governments (COAG) to provide all images from state and territory driver’s licence databases to the federal National Facial Biometric Matching Capability.

The creation of such a comprehensive national facial database is an unnecessary and disproportionate invasion of the privacy rights of all Australians and is fundamentally incompatible with a free and open society. Even more worrying are reports that the government is considering an option that would see corporates purchasing access to this database.

Read more about this via Junkee, InnovationAus, Mashable, The New Daily or the Guardian.

It was welcoming to see global condemnation of Australia’s own Attorney General George Brandis’ attacks on digital rights. Access Now recognized Senator Brandis as a Villain among the annual ‘Heroes and Villains Award’ recipients for his comments in opposition to strong digital security tools like encryption.

As a leading official representing Australia in the notorious “Five Eyes” partnership, Attorney General Brandis has pushed publicly for requirements for companies to implement measures to allow law enforcement to bypass encryption protections for exceptional access to digital content.

Digital Rights Watch’s own Tim Singleton Norton also received a special mention as a ‘Hero’ in the 2017 awards.

Internet access as a human right for asylum seekers

With the shutdown of the Manus Island facility in particular, we’re concerned that people being held there do not have adequate access to phone and Internet communications, in breach of their right to free expression as enshrined in the Universal Declaration of Human Rights and the International Covenant on Civil and Political Rights.

The University of Sydney published a fantastic report into Digital Rights in Australia, which explores urgent questions about the nature of our rights in the digital and social media space, now and into the future.

The report covers rights issues in four areas: privacy, profiling and analytics; government data matching and surveillance; workplace change; and freedom of expression and speech regulation. Watch the panel discussion held at the launch, featuring our own Nic Suzor.

And the rest
Amongst all the other work of this year were these special highlights:

The end of Net Neutrality

Finally, to round out the year, we were extremely disappointed to see the repeal of Net Neutrality in the United States.

Net neutrality is the basic principle that protects our free speech on the i. “Title II” of the US Communications Act is what provides the legal foundation for net neutrality and prevents internet providers slowing down and blocking websites, or charging apps and sites extra fees to reach an audience, which they then pass along to consumers.

The internet has thrived precisely because of net neutrality. It’s what makes it so vibrant and innovative—a place for creativity, free expression, and exchange of ideas. Without net neutrality, the internet will become more like Cable TV, where the content you see is what your provider puts in front of you.

We’ve always been a strong supporter of the global campaign to protect Net Neutrality, and we’ll continue to push for it both here and around the world.

Thank you for supporting us

We’ll continue to work on upholding the digital rights of Australian citizens, but it’s no understatement to say that we couldn’t do any of this work without the backing of our partners, colleagues, supporters and friends.

It’s thanks to the support of:

We’ve come a long way since we founded this organisation in early 2016, and we simply couldn’t do it without you.